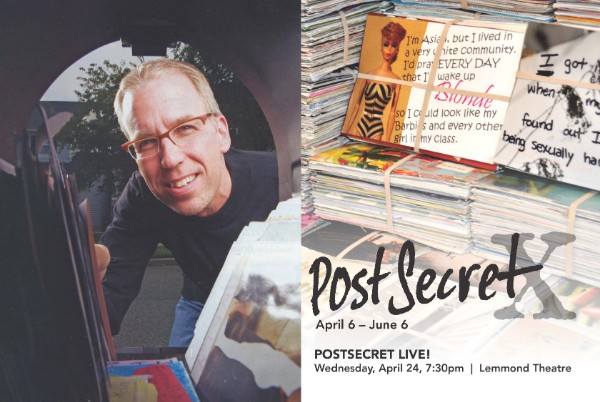 PostSecretX is an art installation of thousands of postcards anonymously submitted from around the world to Frank Warren, who began PostSecret as a community art project in 2004. The exhibition explores the impact of secrets, secret-sharing, and artistic expression of secrets among young adults to help promote a campus-wide supportive environment for students who are affected by mental health issues. To date, more than one million postcards offering highly personal secrets have been mailed to Warren from around the world. Collections have been displayed at the White House and Smithsonian museums in Washington, D.C. and at the Museum of Modern Art, New York City.

Warren, a nationally known Active Minds speaker and author, will appear on campus for a presentation and book signing on Wednesday, April 24, at 7:30 p.m. in Lemmond Theatre in Walsh Hall, He will discuss the history of PostSecret and encourage students to not only speak out but to create support networks to assist each other.

For the installation at Misericordia, we will highlight postcards relevant to young adults, in particular female students and students who are mothers. We are working with the Student Activities Office, the Counseling and Psychological Services Center (CAPS), and the Student Success Center to collect and include anonymous submissions by students at Misericordia University.”

In support of the upcoming “Pathways Out of Poverty” conference being organized by the Ruth Matthews Bourger Women with Children Program on campus on May 22, a section of the PostSecretX exhibition will be devoted to increasing awareness of the impact of poverty on academic progress, especially for women. These anonymous postcards will illustrate responses to the question, ‘What are the specific obstacles for women, women with children, and children of single mothers as they pursue an education?

This exhibition demonstrates how the creative process makes the invisible visible. It follows the legacy of female artists such as Hannah Hoch, Barbara Kruger, and the Guerilla Girls, who have used paper and collage media as a catalyst for social action.

Among the postcard messages on display will be, “I was surprised when I got laid off. And sad. Now I’m relieved, and hoping they don’t ask me back!” "I am 38 and don’t have one single close friend. But I’m not giving up yet.” “I got in trouble when by boss found out I was being sexually harassed.”

To be included in the on campus installation, students can submit postcards at specially marked boxes around campus, including the residence halls, library, art gallery, and Student Success Center. Due to some sensitive content visitor discretion is advised.

In the last thirty years the landscape of contemporary Chinese art has changed greatly as artists have experimented with new media and forms of expression. American audiences have had few opportunities to see these works first-hand outside of major metropolitan museums. Misericordia University, in partnership with Eli Klein Gallery in New York, is proud to present new contemporary Chinese art in "Emerging Dimensions: Works by Li Hongbo and Cai Dongdong."

Paper sculptor Li Hongbo carves through blocks of thousands of sheets of paper to create elastic sculptures that can be stretched across the gallery.

Cai Dongdong, a former documentary photographer, adds ready-made objects such as mirrors to his photographs to challenge the belief that photographs portray reality.

Gallery staff will demonstrate the flexibility of Li Hongbo's sculptures every Friday at 10 a.m., 12 noon, and 2 p.m. Photography and video are allowed for this exhibition. To request a tour or demonstration at other times please contact Lalaine Little, Gallery Director, at (570) 674-6250.

The exhibition explores the evolution of portraiture from the end of the 18th century until the present. In contrast to portraiture as the tired flattery of the rich and powerful at the end of the eighteenth century, the invigorating new movements of Neoclassicism, Romanticism and Realism that took hold of art at the end of the eighteenth century and into the nineteenth century were the result of a desire for a sense of "unvarnished truth," and a more honest and gritty incisiveness of depiction emerged. By the twentieth century, the hallmark of the portrait was individuality; the sense of “personality” was primary, whether stylistically Post-Impressionist, Expressionist, Surrealist, or Realist.

Route 66 is emblematic of the American experience. Nearly every aspect of 20th century United States history is reflected in the story of the people and events along the Mother Road. Those who take the journey down Route 66 today can still explore the Main Street of America. Nearly a hundred years of highway culture can be found, whether a thriving relic or decaying ruin. The highway stretches 2,448 miles and crosses through eight states, tracing the migration of people from the Midwest to the Pacific coast. It showcases the stories of people, places, and events from 1926 until today.

America’s Road also features a photo essay created by photographer and author, Russell Olsen. Olsen researched and photographed 75 classic Route 66 service stations, motor courts, cafes, etc. The sites and structures are shown both as they appeared during the mid-20th century and as they appear today.

On Saturday, July 7th we have partnered with the Northeast Pennsylvania Region Antique Automobile Club of America to host a Car Cruse on campus.

On July 18 children and families are invited to our first movie night featuring a showing of the Disney-Pixar movie, "Cars III." Co-programmed with Chick-Fil-A Misericordia, families are invited to visit the "America's Road" exhibit, where the children will be given an art car kit and a goody bag. They can purchase dinner at Chick-Fil-A in the Banks Student Life Center and go to the Metz Dining Hall to work on their art cars and watch "Cars III