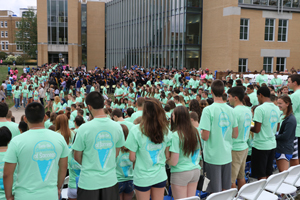 Misericordia University welcomed 440 first-year students and celebrated the second largest incoming class in history at the 2015 Convocation ceremony on Aug. 27 in the Wells Fargo Amphitheater. The annual Convocation ceremony welcomes first-year students and their families to Misericordia University and acts as the official start to the new academic year.

The first-year students were lead into the Convocation ceremony by a contingent of bagpipers and members of the staff and faculty who were attired in academic robes for the occasion. The Convocation program included a welcome by Thomas J. Botzman, Ph.D., Misericordia University president, and an address by alumna Ann Marie Hicks, M. Ed., a 1965 Misericordia graduate whose stellar career included teaching in the United States and Africa.

A native of Plains Township, Mrs. Hicks earned a Bachelor of Science degree in biology with a minor in chemistry and education at Misericordia. She later went on to earn her master's degree in education at George Mason University. During her 18-year teaching career, Mrs. Hicks taught in Beltsville, Maryland, and Smithtown, New York, as well as in Ghana, Africa, where she is credited with being one of 12 founding teachers of The Lincoln School, a school that was developed to educate the children of American citizens and the international community living and working in the Accra region of Ghana. She moved back to the U.S. in 1970 to raise her family, and returned to teaching in 1987 as a biology teacher in Fairfax, Virginia. She subsequently took the post as teacher and chair of the science department at Bishop O'Connell High School, Arlington, Virginia, where she served from 1991 until her retirement in 2003.

Since 1970, she has been a stalwart volunteer and leader with the Annandale Christian Community for Action, in Annandale, Virginia, a coalition of 26 churches that provide childcare, food, financial aid and other social services for the needy in the region.

In her address, Mrs. Hicks shared the success stories of numerous alumni of Misericordia who were inspired, as she was, by the Religious Sisters of Mercy to carry out missions to serve around the world. She urged the first-year students to embrace the charisms of Mercy, Service, Justice and Hospitality, and prepare to make a difference in the world. 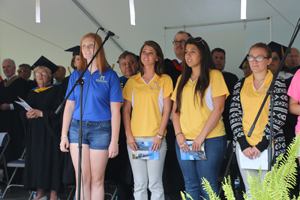 "Each and every one of you has God given gifts and talents," Hicks told the first-year students. "Foremost, choose to develop a heart of Mercy â a critical and open mind capable of caring for today's world. You will have many opportunities to do good, here and out in your community. Seize these opportunities. From my perspective, the secret of happiness is loving and serving one another wherever you may be. Some of the happiest times in my life were on mission trips to Haiti â where the poorest of the poor were full of joy at out visit. The same joy was encountered while we were on a mission in Southern India. Make the charisms of Misericordia your guiding light here and now, and for a fulfilling life."

The first-year resident students arrived on campus earlier in the day and moved into their residence halls with the help of a team of orientation leaders, who trained throughout the summer to direct the move-in efforts. They were assisted by members of the faculty, staff, student body and alumni association.

Orientation for the new students began later in the afternoon and will continue until the first day of classes on Monday, Aug. 31. The orientation program includes the Orientation Day of Service on Saturday, Aug. 29 in which more than 430 students, along with faculty and staff, will volunteer their time and talent in the region.