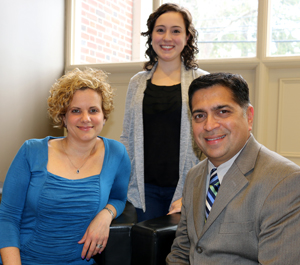 Tia M. Spagnuolo of Wyoming, a speech-language pathology (SLP) graduate student at Misericordia University, was awarded the 2016 Von Drach Memorial Scholarship by the Pennsylvania Speech-Language-Hearing Association (PSHA) at the 57th annual Convention, "Collaborating for Special Outcomes,'' in Pittsburgh in April.

Misericordia University SLP students have received eight out of the last nine scholarship awards. The prestigious award is given annually to an outstanding student from one of Pennsylvania's 14 SLP schools in honor of Dr. Robert Von Drach. Recipients are students who exhibit strong leadership abilities, outstanding academic performance, exceptional clinical skills, and scholarship within the profession.

At Misericordia, the daughter of John and Cyndi Spagnuolo has been a member of the department's National Student Speech-Language-Hearing Association (NSSLHA) since 2011. She has maintained a 3.99 grade point average, while also providing more than 400 hours of clinical assessment and treatment at the university's Speech-Language and Hearing Center in John J. Passan Hall, Greater Nanticoke Area's Elementary Center and Magee Rehabilitation Hospital in Philadelphia.

"A hallmark of Tia's work is that she is an exceptional student who performs in the top 1 percent of her class in all her assignments and academic performance,'' Glen Tellis, Ph.D., professor and chair of the Department of SLP wrote in her reference letter. "Tia is always respectful and courteous. She reads beyond the textbook and devours research articles to obtain a bigger picture about our field.''

Spagnuolo's interest in the specialty field began in high school after attending a speech therapy session for her younger sister. After observing a therapy session at Misericordia University Speech-Language and Hearing Center, the Wyoming Area Secondary Center graduate completed her senior research project on the field of SLP.

"All I truly knew was that I wanted to help people,'' she acknowledged. "I distinctly remember beginning my (senior) presentation by asking them (a panel of teachers) to imagine not being able to use their voices for an entire day. ...Imagine being unable to verbally communicate for a day, to emphasize just how frequently the gift of speech is taken for granted.''

A few years later, Spagnuolo developed a unilateral vocal fold weakness during her first year of graduate school that affected her voice and caused her to feel very fatigued with neck and laryngeal discomfort. She initially feared she would not be able to pursue her dream of helping others rehabilitate their voices.

"I applied everything I had learned and loved about the treatment of voice disorders to my own voice and worked diligently to regain the control and efficiency that I had previously taken for granted,'' she said. "In treatment sessions with my clients, I worked incredibly hard to not only help them find their voices, but also to maintain my own voice. Each successful moment I experienced in a session with a client served as a reminder of why I accepted my self-proclaimed challenge to work harder. The determination and diligence required to overcome this challenge reflects my continued motivation and desire to strive for academic, clinical and professional excellence.''

Spagnuolo also has worked closely with faculty mentors on research to gain better understandings of voice disorders. She received a graduate assistantship to work with Cari Tellis, Ph.D., C.C.C.-S.L.P., associate professor, on numerous projects that enabled her to become proficient in the use of acoustic and aerodynamic equipment, such as Voice Evaluation Suite, Multi-Dimensional Voice Profile and Phonatory Aerodynamic System, and state-of-the-art neuroimaging technology known as functional near-infrared spectroscopy (fNIRS), which is used to detect hemoglobin concentration changes in the brain.

The collaborative research provided an opportunity to present study findings at the 2014 American Speech-Language-Hearing Association (ASHA) Convention in Orlando, Florida; the 7th Estill World Voice Symposium in Melbourne, Australia; the 2015 PSHA Convention in Harrisburg; the 2015 Fall Voice Conference in Pittsburgh, and the 2015 ASHA Convention in Denver, Colorado.

After earning a second graduate assistantship with Dr. Glen Tellis, she explored research in the field of fluency using fNIRS to examine hemoglobin concentration changes in the brains of people who stutter compared to typically fluent speakers during speech and non-speech tasks. Their findings were presented at the 2015 International Fluency Association's 8th World Congress on Fluency Disorders in Lisbon, Portugal. She also co-presented four posters at the conference.

"Misericordia University has provided me with inexplicably wonderful experiences and opportunities,'' Spagnuolo wrote in her application letter to PSHA. "I am grateful for the unwavering support from my mentor, Dr. Cari Tellis, as well as other faculty members in our department. I have received a quality education that has prepared me well for what is to come in my future career. My determination, motivation and strong work ethic have been enriched by my experiences.''

For more information about the Speech-Language Pathology Program at Misericordia University, please log on to www.misericordia.edu/slp or call (570) 674-TALK. Founded by the Sisters of Mercy in 1924, Misericordia University is Luzerne County's first four-year college and offers academic programs on the graduate and undergraduate levels in full- and part-time formats. Misericordia University ranks in the top tier of the Best Regional Universities â North category of U.S. News and World Report's 2016 edition of Best Colleges, and was designated a 2016 Best Northeastern College by the Princeton Review.