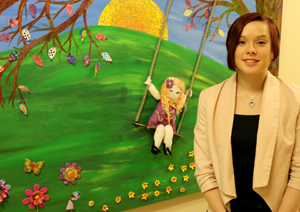 NESHAP is a professional organization that consists of speech-language pathologist, audiologists, educators of the hearing impaired, and speech, language and hearing scientists in Northeastern Pennsylvania. The professional organization's mission is to "promote the interests of and provide the highest quality services for professionals in the field, and advocate for people with communication disorders,'' according to NESHAP's website, www.neshap.org.

The competitive scholarship award is open to students attending Bloomsburg University, East Stroudsburg University, Marywood University and Misericordia University. Students were required to submit two letters of recommendation, an essay that addresses one of three subjects, and various information related to the field of study.

"From the beginning of her education at Misericordia, Samantha has distinguished herself as being one of our most exceptional students in many ways,'' M. Hunter Manasco, Ph.D., assistant professor of speech-language pathology at Misericordia University, wrote in her reference letter. "Samantha has distinguished herself as an incredibly strong positive force in this world and, with this scholarship, she will be better able to continue her exceptional work.''

The daughter of Charles and Aileen Buldo has maintained a 4.0 grade point average during her undergraduate education, while also working as a student research assistant with Dr. Manasco. In that role, she has helped him deliver experimental therapies to people with Parkinson's disease, compiled data from motion capture videos for analysis, and assisted presentations of scholarly research at state and national conferences, while also maintaining her volunteerism efforts in the community.

"She is intelligent, dynamic, enjoys a challenge, and demonstrates true leadership qualities,'' Cimino wrote in her reference letter. "Samantha is unquestionably one of the strongest candidates I know, worthy of receiving this scholarship.''

For more information about the speech-language pathology program at Misericordia University, please call (570) 674-TALK or log on to www.misericordia.edu/slp. Founded by the Sisters of Mercy in 1924, Misericordia University is Luzerne County's first four-year college and offers academic programs on the graduate and undergraduate levels in full- and part-time formats. Misericordia University ranks in the top tier of the Best Regional Universities â North category of U.S. News and World Report's 2016 edition of Best Colleges, and was designated a 2016 Best Northeastern College by the Princeton Review.