Rachel Callahan of Wapwallopen was awarded a competitive fall 2016 Lambda Nu academic scholarship. The daughter of Marty and Joan Callahan was one of 17 students from across the country to be recognized. Lambda Nu has 184 chapters in 43 states and the District of Columbia. Students in each of the chapters were eligible to apply for the scholarships that were awarded nationally in the fall. 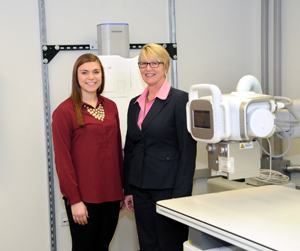 The Misericordia University Alpha Chapter of Lambda Nu was established in 2001. Membership to the honor society is based on an overall grade point average of 3.0 or better and enrollment as a full-time medical imaging student for at least four semesters. Students must also demonstrate evidence of professional commitment beyond the minimum program requirements; the pursuit or completion of an independent research project; be active members in the Misericordia University Medical Imaging Club, and be involved in university-wide student committees and medical-imaging related activities.

The Misericordia University Medical Imaging Program is accredited by the Joint Review Committee on Education in Radiologic Technology. Based on a five-year average (December 2011-December 2015), students in the program have attained a pass rate of 97.32 percent on their first attempt of the American Registry of Radiologic Technologists exam.

For more information about the medical imaging program at Misericordia University, please call (570) 674-6400 or log on to www.misericordia.edu/medical-imaging. Founded by the Sisters of Mercy in 1924, Misericordia University is Luzerne County's first four-year college and offers 42 academic programs on the graduate and undergraduate levels in full- and part-time formats. Misericordia University ranks in the top tier of the Best Regional Universities – North category of U.S. News and World Report's 2017 edition of Best Colleges and also was recognized as a "Best Value'' school by the publication. The Princeton Review named Misericordia a 2017 Best Northeastern College.