Dr. Hinton encourages winter commencement graduates to embrace 'what if?' moments in life 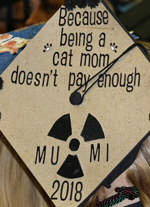 Mary Dana Hinton, Ph.D., president of the College of Saint Benedict (CSB) in St. Joseph, Minnesota, encouraged graduates to embrace the "what if?" moments in their lives when she spoke at Misericordia University's Eighth Annual Winter Commencement Ceremony on Sunday, Dec. 16 at the Anderson Sports and Health Center.

She advised graduates that a fear of the unknown and being vulnerable, and a lack of courage often prevent people from acting on opportunities that come with the uncertainty of "what if?," yet they are two words that have the power to transform those who seize the opportunity.

Dr. Hinton shared her personal story of growing up in poverty in rural North Carolina, and told of the day she found herself facing the question, "what if?" when she was offered and accepted the position of assistant professor of religious studies and the coordinator of multicultural student affairs at Misericordia University for the 2006-07 academic year. She took a leap of faith into the field of higher education and her career blossomed. She was named associate vice president of academic affairs at Misericordia in 2009, and became vice president of academic affairs at Mount Saint Mary College in Newburgh, N.Y., in 2012. Dr. Hinton was appointed president of CSB in 2014. 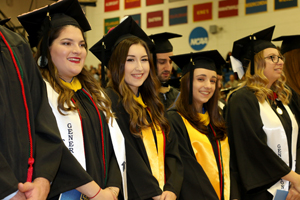 "In order to truly be open to what the world has to offer, one must have the courage to withstand how the world will respond when answering the question 'what if?,'" Dr. Hinton said during her presentation.

She urged the graduates to take the Sisters of Mercy's charisms of Mercy, Service, Justice and Hospitality they experienced at Misericordia and, when given the opportunity, use what they leaned and listen to their hearts to make the tough choices.

"Misericordia's 'what if?' belief in you has already unlocked all that you need to be successful. It has looked at you and chosen you to dream about what you could do if given the opportunity. It has crafted opportunities to enable you to walk into your own grand destiny. To embrace your vulnerability; to nurture your courage and be transformed," she said. 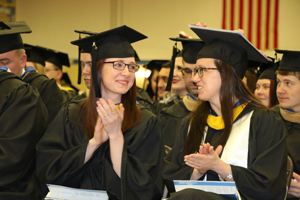 In addition to her role as president of CSB, Dr. Hinton serves on a number of national and regional boards, including the Association of Catholic Colleges and Universities, the Council of Independent Colleges, the Association of American Colleges and Universities, the Minnesota Private College Council Board of Presidents and Women's College Coalition Board of Directors. Dr. Hinton also is the author of "The Commercial Church: Black Churches and the New Religious Marketplace in America" (Lexington Books 2011). 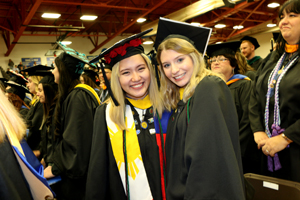 Hannah J. Larkin, a health care management graduate in the pre-doctor of physical therapy program, was selected as student speaker. She, too, encouraged her fellow graduates to reach outside their comfort zone, take chances and choose the path not typically followed as they take their next steps in their education or career.

"The word commencement truly means, 'a beginning or start,' and today we are taking the first steps on the flight to our new destination," she said. "The most critical ability that we possess as we keep pushing forward to reach our dreams is perseverance. The perseverance to learn from our mistakes and challenge ourselves to do better. The perseverance to take on new and exciting adventures. And finally, the perseverance to achieve what others believed we would not.

"I am so grateful that Misericordia has ingrained in us the courage to begin each of our new adventures," she concluded.

Larkin, a Sinking Spring native, holds a 3.99 grade point average and is a nationally recognized scholar athlete in soccer. She was selected recently to the United Soccer Coaches (USC) Scholar All-American second-team and All-Region first-team. Also chosen USC All-Mid-Atlantic first-team and Middle Atlantic Conference Freedom Offensive Player of the Year, she finished third on the Misericordia team with 21 points and eight goals.