During the Summer of 2014, the College of Arts and Sciences launched the inaugural Misericordia University Natural Sciences Summer Research Fellowship Program.

The Natural Sciences Summer Research Fellowship is a 10-week program funded by a Misericordia University grant that provides a $4,000 stipend to each student fellow.

Faculty members who were carrying out summer research projects selected the students who took part in the 2014 Summer Fellowship Program. Among the topics of study were: limiting the spread of disease in hospitals, the biodiversity of local stream ecosystems, and the chemical impact of nicotine on the human body.

Fourth-year biochemistry student Jeremy Osko of Ashley, Pa., collaborated with Frank Yepez Castillo, Ph.D., assistant professor of chemistry, on the research project, âBringing Metabolomics into the Organic Chemistry Classroom: Developing New Laboratory Experiences to Explore the Chemistry of Nicotine in the Human Body." The project addressed the relevance of organic chemistry in fields such as biochemistry, biology and the medical sciences, and was aimed at developing new laboratory experiences for the undergraduate organic chemistry laboratory.

Dr. Yepez Castillo and Osko developed three new protocols for the laboratory that allow students to understand the ways chemistry and biology are connected by using metabolomics. The new experiments also explore the use of modern instrumentation to test for chemicals in biological and analytical systems. The team used molecular dynamics to illustrate the effect of stereochemistry on the interactions between receptors in our brain and nicotine. Results from this research were presented at the Central Regional Meeting of the American Chemical Society in Pittsburgh, Pa., in October 2014. They expect to submit portions of this research for publication in the Journal of Chemical Education.

Jessica Moss, a fourth year pre-medicine major of Hunlock Creek, Pa., conducted research with Frank DiPino, Jr., Ph.D., professor of biology on the project, âHorizontal Transmission of Nosocomial Infections by Health Care Workers.â The project examines the mechanisms of transfer of bacterial and viral infectious diseases in the clinical setting. Moss explored the policies and practices of health care worker attire, such as white labs coats and scrubs, to determine if the clothing transmits viruses and bacteria from human host to human host. This work may lead to practices and policies that would reduce the spread of infectious disease in the clinical setting.

Alexandra Wagner, a second-year biology major of Tamaqua, Pa., conducted research with Dr. Frank DiPino, Jr., professor of biology, for the project, âCloning the Human PAK2 Gene for DNA sequence Analysis, In Vitro Mutagenesis and Functional Studies,â as part of an on-going collaboration with The Commonwealth Medical College in Scranton, Pa. Wagner used applied molecular biology methods to examine the PAK2 gene, which encodes a protein kinase that has been implicated in breast and colon cancers. The research is designed to examine the relationship between the PAK2 protein structure and function with a focus on the structural components of the protein that are involved in regulation in normal cells and dysregulation in cancer cells. Long term, this work could lead to the development of anti-tumor drugs designed to target key structural sites on PAK2 protein.

Fourth-year biology major Alice Messler of Waverly, Pa., collaborated with Cosima Wiese, Ph.D., associate professor of biology, on the project, âAntimicrobial Activity as Related to Alkaloid Composition of Root Extracts from Berberine Containing Plants.â The purpose of the work was to evaluate the antibacterial activity of root extracts from several different plant species to determine whether they are effective as antimicrobial compounds against bacteria. Messler plans to present her research at a conference and submit the work for publication in a journal.

Third-year chemistry major Megan Toda of Olyphant, Pa., conducted her research with Anna Fedor, Ph.D., assistant professor of chemistry and biochemistry. They will present two posters on their projects. The first project, âInvestigating Hydrogen Bonding in Phenol Using Infrared Spectroscopy and Computational Chemistry, â also generated a paper authored by Dr. Fedor and Toda that has been submitted to The Journal of Chemical Education for publication. They will also present a poster on a second research project, âApplying FT-IR/FIR Techniques to Analyze the Intermolecular Hydrogen Bonding Interactions of Biological Models in Solution.â

Kennedyâs project, âA Comparison of Benthic Macroinvertebrate Diversity in Trout Brook and Leonard's Creek, Pennsylvania,â assessed the biodiversity of the macroinvertebrates in the two water systems in order to further understand the relationship between biodiversity and stream ecosystem structure and functioning.

In his project entitled, âA Two-dimensional Analysis of Fish Stomach Contents and Benthic Macroinvertebrates in Trout Brook and Leonardâs Creek, Luzerne and Wyoming Counties, Pa.,â Pheasant also examined the diversity of macroinvertebrates present in the two water systems and focused on the distribution of fish species as well as what macroinvertebrates made up the fishes diets. 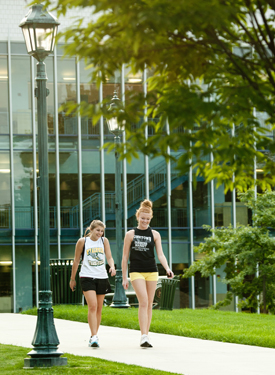