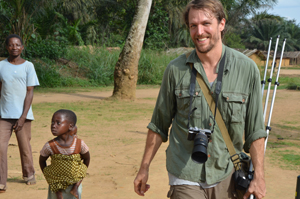 With facial expressions and emotions that closely resemble a human being, bonobos are a species of ape that shares 98 percent of its DNA with Homo sapiens. Considered humankind's closest living relatives, bonobos only live in the Democratic Republic of the Congo (DRC) where their livelihood is seriously threatened and efforts are underway to save them from extinction.

Author Deni Y. BÃ©chard will visit Misericordia University and share his insights about conservation efforts he observed in the Congo and chronicled in his non-fiction book, "Empty Hands, Open Arms: The Race to Save Bonobos in the Congo and make Conservation Go Viral." His illustrated lecture will be held Thursday, Sept. 24 at 7:30 p.m. in the Catherine Evans McGowan Room of the Mary Kintz Bevevino Library. A book signing session will follow.

He will also offer a reading of his book, "Cures for Hunger: A Memoir," on Thursday, Sept. 24 from 4-5:00 p.m. in the Pauly Friedman Art Gallery in Sandy and Marlene Insalaco Hall. This book is a coming-of-age memoir, in which he recounts the mysterious existence of his father and his quest for identity within his father's shadow.

Both events are free and open to the public.

The two events are sponsored by the Soyka Fund for the Humanities and by the Department of History and Government at Misericordia University. Brian Carso, Ph.D., associate professor of history and government, is coordinating the visit. The two events are being held as part of Mercy Week activities on campus and will address issues of worldwide conservation and sustainability â topics that are among the critical concerns of the Religious Sisters of Mercy, who founded Misericordia in 1924. Earlier this year, Misericordia hosted Polar explorer and climate scientist Tim Jarvis, who discussed issues of environmental concern in the Polar region.

"Deni BÃ©chard is a novelist, memoirist, and reporter, but I would also call him an explorer, as any great writer ultimately is," said Dr. Carso. "He has traveled to more than 60 countries, and his stories take us across an assortment of boundaries to better understand the hidden places of the world and the human experience within them. We are privileged to have him come to campus to meet with students and the community."

A seasoned journalist, BÃ©chard has traveled extensively and reported from India, Rwanda, the Congo, Afghanistan and northern Iraq. He has written for numerous publications and media outlets, including the Los Angeles Times, Outside, The Harvard Review, Foreign Policy, Salon.com and Maisonneuve.

He was born in British Columbia and has since lived throughout Canada and the United States. He holds degrees from Marlboro College, Marlboro, Vermont; Middlebury College, Middlebury, Vermont, and from the University of Guelph, Ontario, Canada.

BÃ©chard served as the French editor of "The Adirondack Review" from 2002-04. His first book, "Vandal Love," was published by Doubleday Canada in 2006 and earned the 2007 Commonwealth Writer's Prize for Best First Book and was selected for Oprah's Book Club's summer reading list. The novel follows generations of a French-Canadian family across North America and through the 20th century, as they struggle to find their place in the world.

His second book, "Cures for Hunger," was published in 2012. It explores growing up with his father, who was convicted of robbing banks and served time in prison in solitary confinement.

BÃ©chard's "Empty Hands, Open Arms" book from 2013 details efforts to save the bonobos based on his travels to the Congo in 2012. Bonobos are known for their profound intelligence, emotional expression and sensitivity. They are considered the most vocal of the great ape family. The species is highly endangered and classified by the International Union for Conservation of Nature and Natural Resources' Red List of Threatened Species as facing possible extinction, according to the Bonobo Conservation Initiative (BCI), a non-profit organization based in Washington, D.C., and the DRC, which are dedicated to protecting wild bonobos and their rainforest habitat.

BÃ©chard currently shares his time between Montreal, Canada and Cambridge, Massachusetts. For additional information on the BÃ©chard reading and lecture, contact Dr. Carso at bcarso@misericordia.edu or (570) 674-6395.