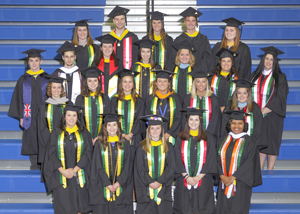 Misericordia University gave special recognition during the 90th annual Commencement ceremonies to 24 graduates who did service or studied abroad during their time at the institution. The students received special stoles as part of their Commencement regalia in colors that represent the country they visited, including England, Guyana, Ireland, Italy, Jamaica and Peru.

The recognition is part of a campus-wide effort to expand and enhance service and study abroad/away experiences for students. In November 2014, Misericordia joined the Generation Study Abroad Initiative, a program of the Institute of International Education (IIE) to form a coalition of institutions committed to doubling the number of American students who study abroad by the end of the decade.

"When we joined IIE in 2014, we had 32 students studying or doing service learning abroad. We promised to double that number by 2019," said Marguerite Roy, J.D., a former United Nations peacekeeper who now serves as visiting professor of Government, Law and National Security and coordinates the study abroad/away programs. "With 87 students in study abroad or away programs in the 2015-16 year, we have far surpassed projections, and I am very proud to say we are at approximately 140 percent of our goal."

Misericordia also has an affiliation agreement with the Council on International Educational Exchange, a study abroad service provider based in Portland, Maine, that offers access to as many as 100 additional study abroad opportunities, including Spain and Poland. In addition, study away opportunities are available at American University in Washington, D.C., and the University of South Dakota, Vermillion, South Dakota.

Faculty-led summer programs are offered in Florence, Italy; Montreal and Quebec City, Canada; Ireland and Jamaica, as well as a short-term, collaborative public health programs offered in Uganda and Tanzania. Under the direction of Campus Ministry, the University also hosts annual service-learning trips to Cross Keys, Jamaica and Georgetown, Guyana, and service trips to Peru every other year.

More than 50 students will study abroad or participate in service learning during the summer and fall, including the University's first nursing and speech-language pathology (SLP) majors to undertake a full semester abroad. "We are working to expand opportunities abroad for students in the medical and health sciences, fields that historically were limited in travel because of laboratory and clinical requirements," Roy added. "By working with them as first-year students, we are able to them get the courses they need, so they can take time their sophomore year to go abroad."

Nursing graduate Rachael Lauren Alles of Dallas attended a service abroad program in Jamaica in January 2015. The daughter of Karen Cartier and Richard Frantz, and Larry Alles and Joan Alles, she has accepted a job at Grand Strand Medical Center in Myrtle Beach, South Carolina, as a registered nurse in the Progressive Care Unit.

A native of Sparta, New Jersey, Matthew Boffa participated in a study abroad program at Umbra, Italy in 2015 on his way to earning a bachelor's degree in philosophy. The son of Dave and Kris Boffa, plans to pursue a career as a chef, restaurateur and entrepreneur.

Rebeka Buczeskie, a history and pre-law graduate from Kulpmont, studied abroad in Italy in the summer of 2015. The daughter of Annette and Robert Buczeskie, Jr., will attend Widener University Commonwealth Law School, Harrisburg, in the fall.

Wearing the stole representing Jamaica, Jenna Burgio of Greenfield Township, earned her Bachelor of Science degree in health science and a Master of Science in occupational therapy. She travelled to Jamaica in the weeks following Commencement to complete the class, OT 470 Non-Traditional Settings/Occupational Therapy with an International Population. The daughter of Joseph and Karen Burgio plans to pursue a career as an occupational therapist in the areas of pediatrics or inpatient rehabilitation, and continue to be involved with international service missions.

Graduate Amanda Casem earned a Master of Science in Occupational Therapy, and a Bachelor of Health Sciences with a minor in gerontology. The daughter of Elaine and Chuck Casem of Mountain Top participated in two service abroad experiences in Jamaica. She attended a service-learning trip to Manchester, Jamaica in 2014 that was sponsored by Campus Ministry, and returned as part of an occupational therapy service group that worked at the Mustard Seed Communities in Kingston, Jamaica in 2015.

Moscow native Kristi Marie Cianfichi, who earned her Bachelor of Science degree in health science and her Master of Science degree in occupational therapy with a minor in psychology and specialization in pediatrics, attended an occupational therapy service-learning trip to Jamaica in 2015. The daughter of Michele and James Cianfichi plans to pursue board certification in pediatrics through the American Occupational Therapy Association. Inspired by her experiences in Jamaica, she also plans to expand her services globally by joining international therapy mission trips with groups such as the Therapy Missions organization.

Leah Davis, who earned a Master of Science in Occupational Therapy and a Bachelor of Health Sciences, is taking part in a service-learning trip to Jamaica this summer. The daughter of Russell and Gretchen Davis of Manahawkin, New Jersey has accepted an offer to work at Fox Rehabilitation, Cherry Hill, New Jersey. She also took part in spring break service trips to Schenectady, New York, and Vermont during her time at Misericordia.

Catawissa native Kaitlin Fink, a medical imaging graduate with a minor in mathematics, participated in a service-learning trip to Jamaica in January 2016. The daughter of Joel and Deborah Fink plans to continue her education at the University of North Carolina's Radiation Therapy Program at Chapel Hill, North Carolina.

Medical science graduate Kayleigh Morein of East Meadow, New York, spent 16 days doing service in Georgetown, Guyana in June 2014. The daughter of Mary and James Morein will remain at Misericordia to pursue her master's degree in the Physician Assistant Program, Class of 2017.

A native of Jersey City, New Jersey, Nicole Negron attended a study abroad program in Ireland in March of 2016. An English major and graduate of the Ruth Matthews Bourger Women with Children Program, Negron has received a full scholarship to the graduate program in Visual Studies at Illinois State University, Normal, Illinois.

Jared Pinter earned a bachelor's degree in English, and also participated in a semester-long study abroad program at the Umbra Institute in Umbra, Italy in 2015. The East Stroudsburg native is the son of Elizabeth and Daniel Pinter. He has been accepted to a Master of Fine Arts program in creative writing at The Ohio State University.

Sarah Powers, an education major from Clinton, New Jersey, attended an Italy literature and film program with Professor Scott Blanchard in Florence, Italy in May 2015.

Sarah Pulice, a business administration graduate with a specialization in marketing from South Gibson, also took part in a study abroad program in Florence, Italy from May to July 2015. The daughter of Anthony and Bonnie Pulice plans to pursue a career in marketing.

Zachary Sabaday, a graduate of the Biology Program with a minor in chemistry, took part in a study abroad trip to Peru in 2013. The son of Joseph and Gail Sabaday of Saint Clair has been accepted to Chatham University, Pittsburgh, to pursue a Master of Science degree in biology.

Glen Mills native Rebecca Santoleri took part in a study abroad program in Jamaica in 2014. The daughter of Teresa and Dave Santoleri earned her master's degree in speech-language pathology.

Kathryn Santoro, a medical imaging graduate from Somerset, New Jersey, studied abroad in Italy in June 2013. The daughter of Kathy and Chuck Santoro plans to further her education in radiation therapy school.

Alexis Smerlick of Schuylkill Haven earned her Bachelor of Science in Health Science and Master of Science in Occupational Therapy with a minor in psychology. She participated in a service-learning trip to Jamaica in May. The daughter of Kim and Kris Feger and Stephen Smerlick plans to pursue a career in geriatric occupational therapy.

Palmer Steiner of Millville earned a bachelor's degree in biology with a minor in chemistry. He took part in a study abroad experience in Peru in 2014.

Amber Renee Swartley, a special education and elementary education graduate from Pottsville. The daughter of Angela and Richard Berdanier took part in a service-learning trip to Jamaica in 2015.

Elena Uribe, who earned her bachelor's degree in psychology, attended a study abroad program in Ireland in the summer of 2014. The Coopersburg native is the daughter of Carla and Manuel Uribe.

Caitlin Vitale of West Pittston earned her master's degree in speech-language pathology. She participated in a service-learning program to Cross Keys, Jamaica in January 2014. She is the daughter of Michael and Marianne Vitale.

Maria Weidemoyer of Perkiomenville earned her Bachelor of Science in Health Science and Master of Science in Occupational Therapy. She took part in service-learning trips to Jamaica in 2014 and 2015. The daughter of Jane and Dennis Weidemoyer has accepted a job as an occupational therapist at Theraplay in Quakertown.

For more information about service-learning and study abroad opportunities for students at Misericordia University, please call (570) 674-6400 or log on to www.misericordia.edu/studyabroad.

For more information about Misericordia University, please call (570) 674-6400 or log on to www.misericordia.edu. Founded by the Sisters of Mercy in 1924, Misericordia University is Luzerne County's first four-year college and offers 42 academic programs on the graduate and undergraduate levels in full- and part-time formats. Misericordia University ranks in the top tier of the Best Regional Universities â North category of U.S. News and World Report's 2016 edition of Best Colleges, and was designated a 2016 Best Northeastern College by the Princeton Review.