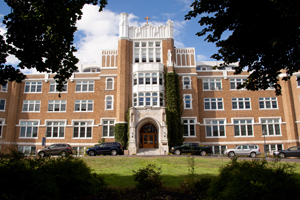 The ranking is in its fifth year and is designed to help parents and students determine which of the country's four-year colleges and universities provide "educational quality, affordability and alumni success," according to MONEY Magazine.

After first screening out schools with graduation rates below the median, those facing financial difficulties, and those with fewer than 500 undergraduates, MONEY also screened out military academies that require a commitment of service in exchange for free tuition. The remaining 727 U.S. colleges were ranked on 26 factors in three categories: educational quality â including six-year graduation rate; affordability â including net price of a degree and student debt upon graduation, and outcomes (alumni success) â including early career earnings within three years of graduation, mid-career earnings and earnings adjusted by majors based on reports from PayScale.com.

MONEY also measured comparative value by assessing how well students at each school did versus what would be expected for students with similar economic and academic backgrounds, and the college's mix of majors. Additional factors considered in the ranking were merit aid, parent and student borrowing, and loan repayment, according to MONEY Magazine.

New this year, MONEY introduced two metrics from federal Department of Education data â regarding graduation rates for Pell Grant recipients and the share of transfer students who earn a degree. Both data points helped provide a more complete analysis of a college's graduation rate. A statistical technique was then used to turn all the data points into a single score and the schools were ranked based on those scores, according to the publication.

"Thank you MONEY magazine for confirming to students and parents that Misericordia University is among the best values in higher education,'' Misericordia University President Thomas J. Botzman, Ph.D., said. "A college education is the best investment you can make to ensure future success. It is also important for families to base their decisions on important statistical information, such as alumni success, financial aid, projected earnings and graduation rates.

"While this ranking places Misericordia in the top 37 percent of colleges nationwide, it also provides a snapshot of why we are a nationally recognized university,'' President Botzman added. "MONEY Magazine and other rankings by respected publications illustrate why Misericordia continues to be considered a prestigious institution to earn an undergraduate or graduate degree."

The Princeton Review, a nationally known education services company, also recommended Misericordia University in its "Best Northeastern" section of its website feature, "2019 Best Colleges Region by Region." Misericordia is one of 225 institutions of higher education the popular website selected based on "excellent academics'' and the results of a survey of students.

In the Princeton Review profile, Misericordia University students refer to the campus' inviting atmosphere as one that attracts a "friendly" and "very inclusive" student population. They describe their campus as "welcoming," and with "a good work/life balance." They also refer to the university as "really community-service oriented" where undergraduates "have a great time serving others."

Misericordia students acknowledged the university's highly respected programs in the health sciences, including medical imaging, sonography, nursing, occupational therapy, physical therapy, speech-language pathology, and solid offerings in business and teacher education. Undergraduates, according to The Princeton Review, are grateful that professors "really seem like they genuinely care about their students." They also truly appreciate that professors "have (a lot of) experience in their field and bring so much outside information into the classroom that you really get a feel for what it will be like when you are working."

The students also said that the school's modest size allows Misericordia to really "cater to each student's needs." One junior explained, "In the end, "Misericordia University is about receiving a top-notch education while providing endless opportunities to grow."

"We are happy to have our students acknowledge our friendly and supportive atmosphere and recognize the dedication, nurturing nature and academic expertise of our faculty and staff," said President Botzman. "At Misericordia, we prepare our students to be leaders in the classroom, in their communities, and in service to others."

Misericordia also ranks in the top tier of the Best Regional Universities â North category of U.S. News and World Report's 2018 edition of Best Colleges, and was designated a 2019 Best Northeastern College by the Princeton Review. The university had a fall 2017 enrollment 2,764 students and offers 56 degree programs on the graduate and undergraduate levels in full- and part-time formats.