Misericordia University is ranked 35th out of 139 colleges and universities in the top tier of the Best Regional Universities North category of U.S. News & World Report's 2019 edition of Best Colleges, which includes institutions of higher education in the northern United States that offer master's degrees and some doctoral programs. 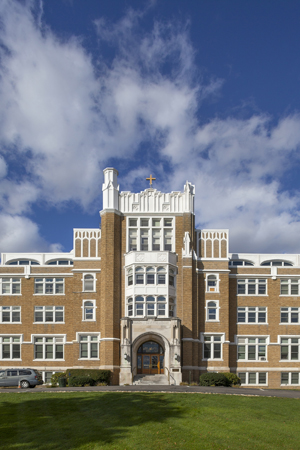 The annual report also named Misericordia a "Best Value'' institution of higher education, ranking it 26th among the Regional Universities North Schools. The added ranking, according to U.S. News & World Report, takes into account a university's academic quality, net cost of attendance and ranking in the top tier.

In addition, Misericordia University is in a five-way tie for 17th place in the ranking for "Best Colleges for Veterans.'' The ranking is based on the college or university being enrolled in the GI BillÂ© and Yellow Ribbon Program, as well as enrolling a minimum of 20 veterans for the second consecutive year and being ranked in the top half of the ranking category, according to the publication. U.S. News & World Report also recognized Misericordia University as one of 55 colleges and universities in the Regional Universities North category for being an "A+ School for B Students.''

Overall, U.S. News & World Report examined 187 colleges and universities in its Best Regional Universities North category â including 46 listed alphabetically in the second tier â and utilized performances across a set of widely accepted indicators of excellence to achieve its rankings.

Since 2007, Misericordia University has climbed 32 places in the rankings â including six places from last year. In the latest edition, Luzerne County's oldest four-year college is included in a tight grouping with 15 other institutions, separated by two points for the rankings of 25th through 35th place. Misericordia is in a six-way tie for 35th place with 69 overall points.

"We are thankful when outside national publications reinforce Misericordia's successful way of inspiring and educating students,'' Misericordia University President Thomas J. Botzman, Ph.D., said. "Through our many curricular and co-curricular opportunities, Misericordia fosters intellectual curiosity, critical thinking, and respect for persons in an environment where all are welcome.''

Key data elements, such as graduate rate (76 percent), classes under 20 (48 percent), student-faculty ratio (12 to 1) and alumni giving rate (14 percent), for example, have Misericordia matching or exceeding other highly ranked colleges and universities. Misericordia's strong performance in the new social mobility criteria reflects the exceptional graduate rate and mission-driven focus on providing opportunity to capable first-generation students and those who have limited family financial resources.

In addition, Misericordia University is on Money Magazine's 2019 Best Colleges list and the Princeton Review recommended the university in its "Best Northeastern" section of its website feature, "2019 Best Colleges Region by Region." Misericordia is one of 225 institutions of higher education the popular website selected based on "excellent academics'' and the results of a survey of students.

"GI BillÂ©" is a registered trademark of the U.S. Department of Veterans Affairs (VA).