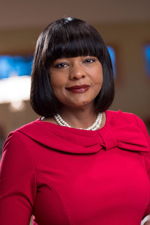 Mary Dana Hinton, Ph.D., president of the College of Saint Benedict (CSB) in St. Joseph, Minnesota, will be the keynote speaker when Misericordia University holds its eighth annual winter commencement ceremony on Sunday, Dec. 16 at 2 p.m. in the Anderson Sports and Health Center. Commencement activities include a baccalaureate Mass at 10:30 a.m. in Lemmond Theater.

During the commencement ceremony, the University will confer degrees to 290 eligible students from 11 states and present Dr. Hinton with an honorary Doctor of Humane Letters degree

A native of Henderson, North Carolina, Dr. Hinton is the former associate vice president of academic affairs (AVPAA) at Misericordia University, having served the university from 2006 to 2011. Dr. Hinton joined Misericordia University as an assistant professor of religious studies and as coordinator of multicultural student affairs during the 2006-07 academic year. She taught undergraduate courses, while also providing mentoring and support to students of color. Dr. Hinton also served as the Misericordia University Diversity Club faculty advisor, and facilitated workshops and training to student affairs offices. She was appointed AVPAA in 2009 with primary responsibilities to oversee diversity, planning and assessment efforts, including implementation of the strategic plan.

In 2011, she was appointed vice president for strategic planning and institutional effectiveness at Mount Saint Mary College in Newburgh, New York, where she was named vice president of academic affairs in 2013.

Dr. Hinton was named president of CSB in 2014. Under her leadership, the college for women has developed a collaborative strategic plan to guide the institution through 2020 and is leading a $100 million campaign. She also has led the process to implement a $43 million campus facilities update. U.S. News and World Report named CSB the top ranked National Liberal Arts Colleges for its operating efficiency.

In addition, Dr. Hinton serves as chair of the Minnesota Private College Council Board of Presidents and is a member of the Women's College Coalition Board of Directors. She is a member of a number of national and regional boards, including the Association of Catholic Colleges and Universities, the Council of Independent Colleges, the Association of American Colleges and Universities, and the Minnesota Campus Compact.

The author of "The Commercial Church: Black Churches and the New Religious Marketplace in America" (Lexington Books 2011), her scholarly focus is on African American religious history, religious education, and leadership, strategic planning, assessment, and diversity in academics.