The Misericordia University Athletics Department is introducing esports as a coed varsity activity beginning with the fall semester. 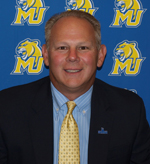 Esports involves teams competing head-to-head in multi-player games online through gaming broadcasters. Misericordia will be the seventh team in the Middle Atlantic Conference to add esports and brings MU's varsity offerings to 26.

"In an effort to provide our student population with diverse competitive opportunities, we look forward to the addition of esports,'' said Chuck Edkins, director of athletics at Misericordia University. "We will begin an immediate search for our coach and begin the recruiting process for the fall semester.''

Misericordia University will compete in the National Association of Collegiate Esports (NACE), the only association of varsity esports programs at colleges and universities in the United States, during the fall and spring semesters. NACE features more than 80 member schools and more than 1,500 student-athletes competing in collegiate video gaming. Misericordia's 15-member team will participate in "Hearthstone," "Rocket League" and "League of Legends" games.

"Hearthstone" is a competitive, collectible card game where players try to outwit and outsmart their opponents using cards that reflect monsters and magic spells. "Rocket League'' is similar to "soccer with rocket-powered cars" and features one to four players per team. Set in an imaginative world, "League of Legends" gamers take the role of a powerful summoner, calling forth and controlling brave champions in battle.

In the coming months, the Athletics Department will build a dedicated esports gaming room on campus, featuring about 15 Xidax gaming computers. The campus community and fans will be able to watch spectator-friendly competitive gaming between the colleges and universities on a Misericordia University-dedicated Twitch account that will be ready at the start of the fall semester in mid-August. Twitch is a service that primarily focuses on broadcasting esports games and streaming video games. In 2017, for example, viewers watched almost 6 billion hours of content on the service, according to Forbes.

For more information about esports at Misericordia University, please contact Edkins at 570-674-6397 or cedkins@misericordia.edu.

For more information about the athletic programs at Misericordia University, please call (570) 674-6374 or visit athletics.misericordia.edu