Misericordia University graduate student Brandon Winslow has received international recognition for his work as a resident director for the Office of Residence Life. The Turnersville, New Jersey native was named the Outstanding Graduate Student for Region II by NASPA, the professional organization for student affairs administrators in higher education. 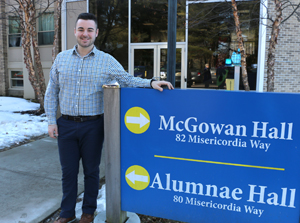 Winslow will be honored in June at the Region II/III NASPA conference in Washington, D.C. The award recognizes those who have made a significant contribution to their campus, demonstrated academic achievement, exceeded the expectations of their leadership position, taken a leadership role at their institution or at the state or regional level, and demonstrated substantial contribution to the student affairs process.

Winslow was recognized for his work to develop and carry out the new initiative, "Welcome Week," at Misericordia that provided more than 60 student activities during the first week of classes. He spearheaded collaboration between 15 university departments in an effort to engage the incoming first-year students, as well as those in the upper classes.

The programs included "Reslife Nite Life," a carnival-themed game night in the Anderson Sports and Health Center; "Taste of the Back Mountain," featuring local restaurants; and "Hot Dogs with the Deans." Student Life Vice President Kathleen "Kit" Foley and Dean of Students Amy M. Lahart participated as drivers in "Cash Cab," where students earned Cougar Bucks during golf cart rides around campus if they could answer questions about Misericordia and its history. In addition, during the "Guess the Price" art auction, students were able to bid on and win painted artwork created by staff members for their rooms on campus.

"As a resident director, Brandon was asked to develop, plan and execute a robust 'Welcome Week' of activities for our campus. It was not meant to be solely for our first-year students as an extension of orientation, but a campus-wide event that would create excitement for the new start of another academic year," said Lahart. "His effective communication skills and strong interpersonal skills led to numerous offices across campus joining in this collaborative event to showcase the hospitality and warmth with which we welcome our new students and those returning to us."

Winslow, the resident director for Misericordia University's Alumnae and McGowan Halls, earned a Bachelor of Arts degree in sociology from Widener University. He will graduate from Misericordia in May with a master's degree in organizational management.