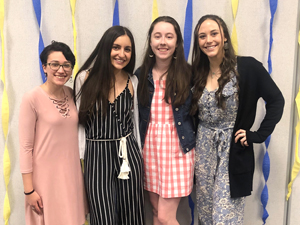 "Winning this award is an amazing accomplishment and it shows all the work that was put into this chapter this year,'' said Emily Magrini, president of the Misericordia University NSSLHA Chapter and a resident of Avon, New Jersey. "It is an amazing feeling to have your work recognized on a national level.''

By earning Gold Chapter Honors, the Misericordia student organization has shared the gift of leadership, while demonstrating that the future of the professions is filled with strong leaders who are committed to serving and advocating for their clients, according to the National NSSLHA.

National NSSLHA Chapter Honors are awarded to affiliated NSSLHA chapters that demonstrate an outstanding effort to support National NSSLHA's mission to inspire, empower and support students in communication sciences and disorders programs. NSSLHA is the only national student organization for pre-professionals studying communication sciences and disorders recognized by ASHA. Established in 1972, NSSLHA is headquartered in Rockville, Maryland, and supports more than 13,400 members and more than 300 chapters at colleges and universities nationwide.

For more information about the speech-language pathology program at Misericordia University, please call 570-674-6400 or visit www.misericordia.edu/slp.