<Back to News
University honors academic accomplishments of co-valedictorians

Misericordia University recently recognized the academic accomplishments of the co-valedictorians for the spring 2019 graduating class during the 93rd annual spring commencement ceremonies at the Anderson Sports and Health Center. 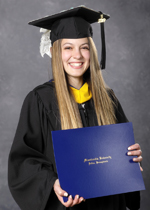 "Our time here at Misericordia University has instilled in us the importance of developing our own unique passions and curiosities, bringing us to this achievement that is graduation,'' said Spilsbury, who will be a graduate student in Misericordia University's Master of Science degree program in speech-language pathology in the fall and will complete her clinical work in the Steel City.

Spilsbury's academic career also was marked with notable scholarly presentations at state, national and international conferences. A member of a research team under the direction of Professor Cari Tellis, Ph.D., CCC-SLP, since her freshman year, Spilsbury addressed voice, fluency and other communication disorders while conducting her scholarly work. The team's research was presented at conferences in Tokyo, Japan; Los Angeles, California; Philadelphia, Pennsylvania; Boston, Massachusetts, and more. 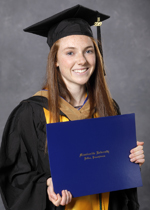 An outside back on the women's soccer team, McHugh will return to Misericordia in the fall as a graduate student in the MBA program. She also will play soccer in the fall for the squad that went 17-3-2 overall and won its third straight MAC Freedom title before advancing to the Elite 8 of the NCAA Tournament last season. 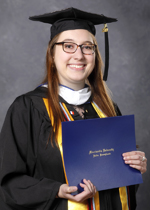 Friends Service Committee to create an online public library in observance of its 100th anniversary. In addition, she presented at state and international scholarly conferences in Scranton, Pennsylvania.; Bethlehem, Pennsylvania, and Paris, France, and volunteered as a student ambassador for the Department of English's annual "English Day for High School Students'' on campus.

Scorey will continue her education as a full-time student in the Master of Arts teaching program at Marywood University, while teaching introduction to writing part time at Luzerne County Community College.

The Misericordia University graduates each completed their undergraduate educations with 4.0 grade point averages.