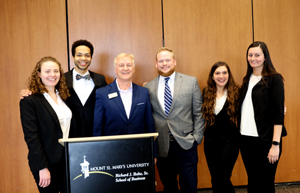 A team of students from Misericordia University recently competed in the Mount St. Mary's University (MSMU) Business Ethics Case Competition in Emmitsburg, Maryland. The BB&T Center for the Study of the Moral Foundations of Capitalism at MSMU sponsored the annual event, which expands dialogue on business ethics to other colleges and universities.

The case study explored the rules around illicit insider trading and the ethical transgressions and fall from grace of Rajat Gupta, a celebrated Indian-American executive who was the former managing partner of McKinsey and Co., a director on several of the largest publicly traded firms' boards and a well-respected philanthropist. Gupta was convicted of engaging in securities fraud in 2012.

The students examined what qualities helped Gupta succeed and become a leader throughout his career; what events might have led him to subsequently compromise his integrity, and how someone in Gupta's position makes decisions that compromise their situation and integrity.

For more information about the Department of Business at Misericordia University, please call (570) 674-6400 or visit www.misericordia.edu/business.