Walking along Lake Street with students, faculty, staff, administration and state and local officials, it was easy to see why Misericordia University stressed the importance of the more than 3,000-feet of sidewalk that was constructed along the busy roadway in Dallas borough and township. 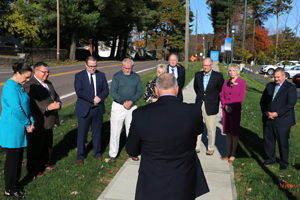 The more than $1 million, two-phase initiative created a safe pedestrian path along a busy state road that averages more than 1,500 vehicles per day, according to a PennDOT traffic study completed before the first phase of the project began in 2016. The five-foot wide sidewalk begins at the North Gate of campus and extends south to the historic archway, the main entrance to the campus community, where it connects with the first phase of the project.

The sidewalk's first phase â 1,000 feet of sidewalk â extends south from the archway in Dallas Twp. toward downtown Dallas Borough's business district. A small bridge spans Toby's Creek allowing pedestrians to walk safely to the intersection of Center Hill Road and the resumption of neighborhood sidewalks on Lake Street, which extend downtown along both sides of the two-lane roadway.

The University's ribbon-cutting ceremony near the North Gate of campus enabled Misericordia University officials to acknowledge and thank elected officials for their support and the financial investment by the state that enabled the project to become a reality. 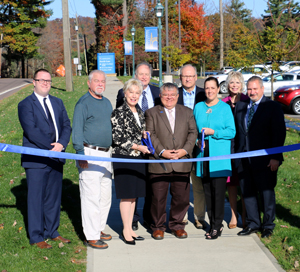 "We are pleased to see this important safety project completed,'' said state Sen. Lisa Baker, R-20th. "It is tangible evidence of how the university is working in multiple ways to improve ties within the community, physically as well as educationally."

"It was my pleasure to work with Misericordia University to assist them as they continue to grow," said state Rep. Karen Boback, R-117th. "With this most recent improvement, the University will be better connected to the heart of Dallas than ever before. I could not be more exciting for the University, its students and the local merchants who will benefit as a result of this expansion."

In 2018, Misericordia received $320,870 through the Commonwealth Financing Authority Multimodal Transportation Fund to complete the second phase of the more than $580,000 project, which included 160-cubic yards of concrete for the 2,142-foot long sidewalk and a large retaining wall alongside McGeehan Field at the intersection of Townhouse Road and Lake Street. The project also includes safety lighting, detectable warning surfaces and crosswalks to residential areas nearby. Misericordia completed funding for the project by contributing almost $260,000 and committing to the maintenance of both phases of the sidewalk project during inclement weather and future repairs that may be necessary.

For the first phase of the safety initiative, Misericordia worked with the state Department of Community and Economic Development's Northeast office to secure funding through the Keystone Communities Program (KCP) and the Luzerne County Local Share Account. KCP awarded $165,000 to the University, in partnership with Dallas Twp., to complete the funding component of the more than $430,000 project. The University also received $150,000 through the Luzerne County Local Share Account in support of the project. Misericordia paid the more than $115,000 balance.

"The entire university community appreciates the support from our regional elected officials in helping us create a pedestrian friendly neighborhood linking our students to the small businesses and services nearby," said Thomas J. Botzman, Ph.D., president. "Local residents, students, and visitors enjoy the new park at the base of Lake Street. Combined with the sidewalk enhancements, it creates an attractive gateway to our community. Our neighbors now have safe, convenient access to our campus and its resources."