Misericordia University student Alex Skopic of Springville recently received national recognition for his essay, "This Means War: Antisemitism, Fascist Rhetoric, and the Duty of Opposition,'' in a writing contest sponsored by The Elie Wiesel Foundation for Humanity. 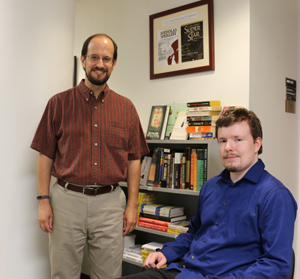 The son of Tim and Linza Skopic received an honorable mention in the 2019 Elie Wiesel Prize in Ethics Essay Contest. The foundation, established by the Nobel Peace Prize recipient, combats indifference, intolerance and injustice through international dialogue and youth-focused programs that promote acceptance, understanding and equality.

The essay contest is open to college juniors and seniors in the United States who wish to articulate an ethical issue they have encountered and analyze what it has taught them about ethics and themselves. Overall, the contest works to increase public dialogue on ethical matters of importance.

In his 19-page essay, Skopic outlines the first time he heard about the mass shooting in 2018 at the Tree of Life Congregation in the Squirrel Hill neighborhood of Pittsburgh that killed 11 people. The loss of life, while tragic, did not surprise him. The rise of antisemitism, alt-right movement and modern Nazism leading up to the 2016 presidential election culminated with violent and deadly riots in Charlottesville, Virginia in 2017.

The national events "jolted" the Misericordia student out of "complacency" and inspired him to research the very nature of fascism, antisemitism and the Holocaust. He educated himself, first reading history books and then attending academic programming on campus that addressed the atrocities that occurred during World War II.

The Misericordia student focused his research and conclusions on the use of three words: Alt-right, problematic and optics. "As an English major, I was drawn to the language they used,'' he wrote in his essay. "Words are my trade, and I believe we have a responsibility to use them wisely.''

Skopic dedicated the essay to Max Levitas, a veteran antifascist fighter and activist who died in 2018 at the age of 103.

For more information about the Department of English at Misericordia University, please call 570-674-6400 or visitÂ www.misericordia.edu/English.