G. Jonathan Greenwald, a career U.S. diplomat and retired specialist in international law and conflict prevention, will be the keynote speaker when Misericordia University holds its ninth annual winter commencement ceremony on Sunday, Dec. 15 at 2 p.m. in the Anderson Sports and Health Center. Commencement activities will include a baccalaureate Mass at 10:30 a.m. in Lemmond Theater. 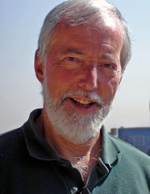 During the commencement ceremony, the University will confer degrees to 248 eligible students from nine states and present Greenwald with a Doctor of Humane Letters degree.

A Kingston native who holds degrees from Princeton University and the Harvard School of Law, Greenwald retired from the State Department in 1998 as minister-counselor of the U.S. Mission to the European Union. His 30-year career included posts in Belgrade, Budapest, Madrid, West Berlin and East Berlin, where his focus was on transatlantic relations, European Union, the Middle East and terrorism. During his time in East Berlin, he was the U.S. Embassy’s political counselor as the Berlin Wall fell and Germany reunited. He served on U.S. delegations to the United Nations General Assembly and the international conferences that drafted, then reviewed the Helsinki Final Act on Security and Cooperation in Europe. He also held important positions in the U.S. State Department’s legal, intelligence, human rights, counter-terrorism and European bureaus.

From 2006 until completion of the work in 2017, Greenwald also served pro bono as the U.S. State Department-designated member of the commission created by a U.S.-Austria agreement to adjudicate some 21,000 Holocaust-era claims on behalf of the Austrian National Fund for Victims of National Socialism. In recognition of his exemplary service, Austria conferred on him its High Honor Award with Star for Services to the Republic.

As a member of the Board of Trustees and 1960 graduate of the Wyoming Seminary College Preparatory School in Kingston, Greenwald most recently initiated a unique project in partnership with the Givat Haviva International School in Israel and the Schule Schloss Salem boarding school in Germany to bring Israeli and Palestinian students together to study. Launched in 2017, the project is designed to serve as a demonstration and inspiration to other top schools globally to do the same, with a goal to strengthen the collaboration and people-to-people infrastructure that can ultimately support a two-state solution to the Israeli-Palestinian confrontation.

He has taught diplomacy as visiting professor at Lawrence University, Appleton, Wisconsin, and conflict prevention, counter-terrorism and European and Middle East politics at Lawrence summer programs and the Jackson School of International Studies, University of Washington, Seattle.

He led a seminar on Iran and the U.S. that focused on their nuclear negotiations at the Central European University’s School of Public Policy in Budapest, Hungary in 2014, and coordinated foreign policy issues for Senator Bill Bradley’s presidential campaign in 1999-00. He is also author of the book, “Berlin Witness: an American Diplomat's Chronicle of East Germany's Revolution,” and has written articles for the Washington Quarterly, Aussenpolitik, Los Angeles Times, Financial Times, Haaretz, Forward and Politico.

A resident of McLean, Virginia, Greenwald is a member of the U.S. Council on Foreign Relations, the Washington Institute of Foreign Affairs, the American Foreign Service Association, the Democratic Party’s National Finance Committee, the leadership councils of Foreign Policy4America and J Street, and the Boards of the Institute for Integrated Transitions, Barcelona and the Balkans Policy Research Group. Greenwald speaks German and his native English fluently, as well as French and Hungarian, with some practice.