Kingston native G. Jonathan Greenwald, a career U.S. diplomat and retired specialist in international law and conflict prevention, encouraged graduates to keep an open mind and make the most of their education by giving back to society when he spoke at the Misericordia University ninth annual winter commencement ceremony on Sunday, Dec. 15 in the Anderson Sports and Health Center. 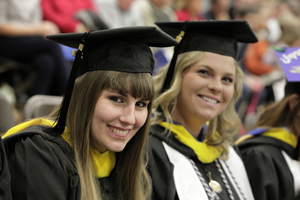 During the program, the University presented Greenwald with an honorary Doctor of Humane Letters degree and conferred degrees to 249 eligible students hailing from 10 states, including Arizona, Connecticut, Delaware, Maryland, New Jersey, New York, Pennsylvania, South Carolina, Virginia and Vermont. Dignitaries at the ceremony included Thomas J. Botzman, Ph.D., president, and David Rehm, Ph.D., vice president of academic affairs, Misericordia University; and Monsignor John Bendick, a member of the Misericordia Board of Trustees, who offered the Benediction.

In the first of two missives, Greenwald stated that no matter how each of the Misericordia graduates planned to earn a living, he hoped they would take with them the importance of “learning to think,” which he defined as “an open-minded approach to issues that values facts, weighs multiple views, takes into account history and experience, and both assesses consequences and weighs alternatives.

“Whether your major has been in the humanities or liberal arts, in science, health studies, business or law enforcement, the academic rigor required to excel, the readiness to learn and to test one’s knowledge against new ideas and differing views is essentially similar,” Greenwald stated. “How well your education has prepared you in this is, I suggest, a critical criterion for judging the value of what you have gained from your university years.” 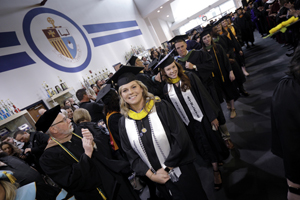 Citing willingness to give back to the community and society at-large as an equally important calculator of the value of higher education, Greenwald called service an essential, moral component of education and an integral aspect of what it should mean to be a university graduate. “A worthy education requires its complement: actions, the manner, way and purpose to which learning is ultimately put. You will only truly have made full use of the education that you have gained at Misericordia and that you may supplement in the future if you undertake actions that go beyond your own immediate interests and those of your family,” Greenwald offered. “Each of us privileged to study and learn at university should seek in his or her own way to give back to the larger community and society in which we live.”

Greenwald said that his 30-year career in public service to his country has allowed him to observe history close up, including the fall of the Berlin Wall. “There are many forms of public service, including everyday ones as outwardly humble but vital as seeking ways to improve our neighborhoods and schools, or aiding those on the streets and in need of shelter or in the late stages of life who still need signs of caring and love,” he added. “I make no effort to rank any of the many possible forms of service. Each of you will decide for yourself where your own interests and opportunities lie. How much you ultimately return to our common community will provide perhaps the truest calculation of the value of your Misericordia education.” 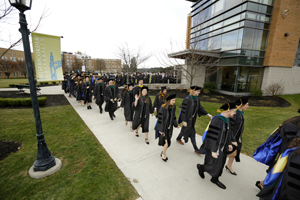 Author of the book, “Berlin Witness: An American Diplomat's Chronicle of East Germany's Revolution,” Greenwald retired from the State Department in 1998 as minister-counselor of the U.S. Mission to the European Union. The focus of his 30-year career was on transatlantic relations, European Union, the Middle East and terrorism. He was the U.S. Embassy’s political counselor as the Berlin Wall fell and Germany reunited. Greenwald also served as the U.S. State Department-designated member of the commission created by a U.S.-Austria agreement to adjudicate some 21,000 Holocaust-era claims on behalf of the Austrian National Fund for Victims of National Socialism. From 2000 to 2017, he was vice president of the International Crisis Group, a leading non-governmental conflict prevention organization. In addition, as an alumnus and member of the Board of Trustees of the Wyoming Seminary College Preparatory School in Kingston, Greenwald recently initiated a project in partnership with the Givat Haviva International School in Israel and the Schule Schloss Salem boarding school in Germany to bring Israeli and Palestinian students together to study. He resides in McLean, Virginia.

Student speaker Emily Connell, of Rush, N.Y., also encouraged her fellow graduates to embrace the values they learned at Misericordia and carry them onward as servant leaders in their respective communities.

“Throughout our time here, we have learned not only what it means to be successful students, but also good people,” Connell stated. “We are more than prepared to take an active role in creating lives that we are proud to live. When we do that, we better our surrounding communities. We are able to pay it forward, so that when we interact with others, they view it as serendipitous that we came into their lives, just like (the serendipity of meeting good people) we experienced during our time here.”

Connell said that all the graduates had different reasons for choosing Misericordia, yet it is the interactions in class, in athletics and organizations, and time spent with friends – all connected by a commonality of Misericordia values – that will benefit them the most. “All of these pursuits have one very important thing in common: they encourage us to put the group before ourselves. That is the purpose of servant leadership, and that is not a lesson that every college student gets to learn. It’s part of what makes a Misericordia University education so unique.”

Connell added, “We’ve spent our time here exploring, trying to figure out who we are and what we want to do with our lives. That exploration doesn’t have to stop now. Misericordia has given us the tools we need to continue to grow throughout the next phase of our lives so that we can continue to be active members of our communities and serve others.”

The daughter of Dennis and Jodi Connell was awarded her bachelor’s degree in psychology and will continue her graduate education at Misericordia University in the Doctor of Physical Therapy program. She is an active member of the Misericordia Dance Ensemble and Cougars for Autism Awareness Club, and earned dean’s list honors. As a member of the women’s lacrosse team, she was twice presented the Coach’s Award and was named to the Middle Atlantic Conference Spring Academic Honor Roll in 2017, 2018 and 2019. She was selected as commencement speaker based on having the highest grade point average for the class as of the spring 2019 semester. Her long-term career goal is to work with children who have disabilities and movement disorders as a pediatric physical therapist.