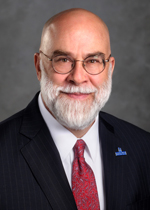 David B. Rehm, Ph.D., vice president of Academic Affairs at Misericordia University, has been elected to a second term as a commissioner for the Middle States Commission on Higher Education (MSCHE). His term runs through Dec. 31, 2022.

The 29-member board is comprised of leaders in academia, including eight who began their first terms on Jan. 1 and four returning board members, including Dr. Rehm. The board members were elected by a vote of MSCHE member institutions in the fall.

In addition, Dr. Rehm serves as chairperson of the MSCHE Standing Committee on Follow-Up Activities and Candidate Institutions. The committee is responsible for recommending actions to MSCHE for institutions being monitored and for candidate and applicant institutions.

Dr. Rehm regularly serves as a peer evaluator and team chairperson for MSCHE and served as a member of MSCHE's Steering Committee for the revision of "Characteristics of Excellence," which outlined academic standards for colleges and universities. The new "Standards of Accreditation and Requirements of Affiliation" were adopted in 2014.

MSCHE serves institutions of higher education in Delaware, the District of Columbia, Maryland, New Jersey, New York, Pennsylvania, Puerto Rico, the Virgin Islands, and other geographic areas. The commission, through accreditation of colleges and universities, assures students and the public of the educational quality of higher education, according to MSCHE.

Dr. Rehm assumed his position as the chief academic officer at Misericordia University in 2017 after having served since 1995 in various capacities at Mount St. Mary's University in Emmitsburg, Maryland. He served as a professor of philosophy, provost and vice president of academic affairs during his tenure at Mount St. Mary's. As provost, he oversaw curriculum revision, faculty development, academic reorganization, program accreditation, strategic planning, and multiple building projects.