The National Conferences on Undergraduate Research has accepted a research poster by a Misericordia University student-faculty research team for presentation at Montana State University in March. 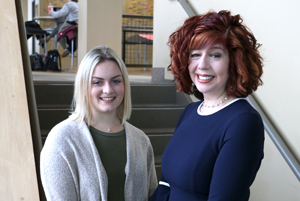 Viviana X. Lucabeche, Ph.D., L.C.S.W., associate professor of social work, and Katelyn Campbell of Sunbury, an undergraduate social work major, collaborated on the study, "Treatment Completion and Gender Disparities: Mandated Versus Non-Mandated Treatment Outcomes for Opioid Users.'' The conference received more than 4,000 submissions from across the country. Campbell, a Line Mountain High School graduate, is the daughter of David and Shannon Campbell.

The National Conferences on Undergraduate Research have been the premier national conferences devoted exclusively to undergraduate student research and creativity in all disciplines for 34 years, according to the conference.

The Misericordia University study addresses the nation's opioid epidemic and a segment of society that is most vulnerable to the addictive drug. According to the National Institute on Drug Abuse, up to 130 deaths occur daily because of opioid overdoses. Dr. Lucabeche and Campbell focused their work on people who are on the poverty level with opioid use disorder.

This population, according to Misericordia researchers, has distorted decision-making abilities, which increase their vulnerability to illegal behaviors. Therefore, they examined the effectiveness of mandated versus non-mandated treatment due to limited research being available on the effectiveness of mandated treatment, specifically for people with opioid use disorder.

In addition, Misericordia University researchers examined treatment options available to both genders and whether or not there are more treatment barriers for women, as compared to men, that affects treatment completion.

The results of Misericordia University's research study will be presented at the National Conferences on Undergraduate Research.

For more information about the social work program at Misericordia University, please call 570-674-6400 or visit www.misericordia.edu/socialwork.

Misericordia University Associate Professor Viviana X. Lucabeche, Ph.D., L.C.S.W., and student mentee Katelyn Campbell of Sunbury, Pa., an undergraduate social work major, will present their research poster, 'Treatment Completion and Gender Disparities: Mandated Versus Non-Mandated Treatment Outcomes for Opioid Users,' at the National Conferences on Undergraduate Research in Montana. Their study was chosen from more than 4,000 submissions from across the country.